A Kalispell artist has teamed up with Lakeside Elementary to put her latest art installation to use helping children develop social and communication skills.
Dawn Duane’s “Year of the Dog” exhibit features dozens of photos of French bulldogs, which she hoped would help bring some light and joy to the Flathead in the midst of the long, gray Montana winter.

According to Duane, “looking at pictures of dogs and puppies has been proven to lower people’s blood pressure and heighten their endorphins, making for a happier person.”
She reached out on Facebook, explaining her project and its goal, and in response, she got participants from all over the world sending her photos to add to her own collection.
Around 50 percent of the photos featured in the entire exhibit came from Frenchie owners in Florida, Brazil, Russian and other places, Duane said.
The main exhibit hangs in the Kalispell Center Mall, brightening the walls with pictures bulldogs doing everything from taking bubble baths to reading books.
When Lakeside Elementary’s mental health advisor Tara Trotter heard about the project, she asked if Duane could bring a smaller version of the exhibit to the school as a way to involve kids and brighten the school’s hallways as well.

“Animals are a way of conversing and connecting for kids,” Trotter said.
Duane made copies of a third of her larger show for the school, and they now hang along the wall near the front office where, students pass by every day.
The school counselor, Gaelynn Briton, said the photos have become a new conversation piece, prompting kids to share stories and connect with each other.
“It just kind of seems to brighten their day a little bit,” Briton said. “And it’s a conversation piece for those kids who sometimes might not be able to come up with something to talk about.”
The children, starting as young as kindergarten, find ways to relate to the photos, making connections between the dogs and their own pets, and finding ways to relate to each other through stories of wet kisses and injured animals.

“We’re working on empathy, and they really empathize with animals,” Trotter said. “To be able to get out of themselves and on to something else is a big piece developmentally, and I think animals make it a little easier to connect.” Duane said she has also seen and heard of the photos displayed at the mall having much of the same affect on adults, grabbing attention and sparking positive encounters and conversations between strangers. According to Duane, several local sponsors helped fund the cost of putting the project together, and she managed to raise around $2,000 for the production of her positive and adorable art show. “It brings a lot of conversation and it does bring a lot of smiles,” Duane said.

For more information about Duane and her artwork, visit www.dawnduane.com .
Reporter Mary Cloud Taylor can be reached at 758-4459 or mtaylor@dailyinterlake.com 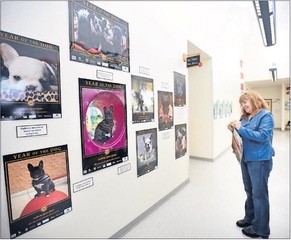 DAWN DUANE adds a poster to her collection of “Year of the Dog” posters at Lakeside Elementary on April 11. The posters feature images created by Duane as well as pieces submitted to the project. Additional pieces are on display at the Kalispell Center Mall. (Brenda Ahearn photos/Daily Inter Lake) 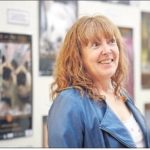 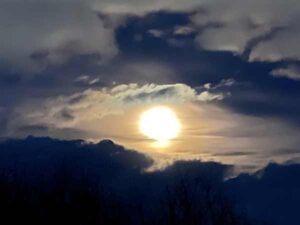